There’s a lot of information out there about microservices. In this post, I’m going to describe how I see people approaching microservices and point out some of the good bits of information to get familiar with the concepts. Fair warning, this is somewhat of a meta-post.

After reading a few articles on microservices, people that have been creating services or have read about services for the last few years inevitably compare microservices to Service Oriented Architecture (SOA). Apart from the silly comparison that “Service Oriented Architecture” has 27 letters and a 3 letter acronym that can be pronounced (unless you’re an initialism person) and “microservices,” while being 13 letters, has a 2 letter abbreviation “μs,” but is pronounced the same with no added benefit to shortening - a sort of architectural irony - there’re a lot of good parallels with microservices and SOA.
Approaching microservices via SOA is a great starting point since many in the software industry are familiar with SOA. Some of us greybeards will get a bit prickly and bring up things such as CORBA, etc. - and they’re right: the name may be new, but the concepts have been around for a good long time. One of the first instances of the term microservices is in discussions of the linux microkernel (add reference here). Further, microservices are almost always implemented in a unix-style of composition, small singly focused services, used together.
Most of us in the industry actively acknowledge that vendor-driven SOA has hit it’s plateau of usefulness, teetering on being considered harmful - damaging the principles that SOA stands for (unless, of course, you work for an ESB vendor) and of software architectures based upon SOA.
Classic SOA principles still apply to microservices such as self-contained, loosely coupled, reusable, business-oriented services that communicate via a (typically) network protocol, but SOA has baggage. That baggage is primarily due to the vendor-driven implementations of SOA applications, such as ESBs, and protocols, such as SOAP and the WS-* suite, which have engendered monolithic applications, nominally are made up of services. Consider microservices as a new approach to implementing SOA, mixing in concepts of distributed computing and lean, and you’ll have the lineage. A great analogy is also the relationship between agile, and an implementation of agile, like scrum or kanban or XP.
Microservices is SOA principles done right.

The other day, one of my friends IM’d me asking if I’d heard of CQRS because some of his colleagues were super excited and going to implement it. Apparently, there’s a .NET article or two espousing the wonders of Command Query Responsibility Segregation and other developers on his team were holding a meeting to discuss using it and he wanted to know my opinions on it. I’ll talk a bit about CQRS and other patterns, later, but this entré to microservices, especially for existing applications, a bit like randomly picking a page out of the Gang of Four Design Patterns book and refactoring everything based upon that.
Another - and better - approach that people take towards grasping microservices is via containers, like Docker, or practices like devops. Knowing about containerization implies that the person or organization values some level of immutability in deploying applications as services and has some buy-in for this style of development and deployment. Devops ups that buy-in with small teams focused on producing products and owning the full lifecycle of the product. The icing on this perspective on microservices is that it’s a natural exension of the trends of agile->devops->continuous delivery.
A colleague of mine, Ian Goldsmith, drew this diagram to represent this conception: 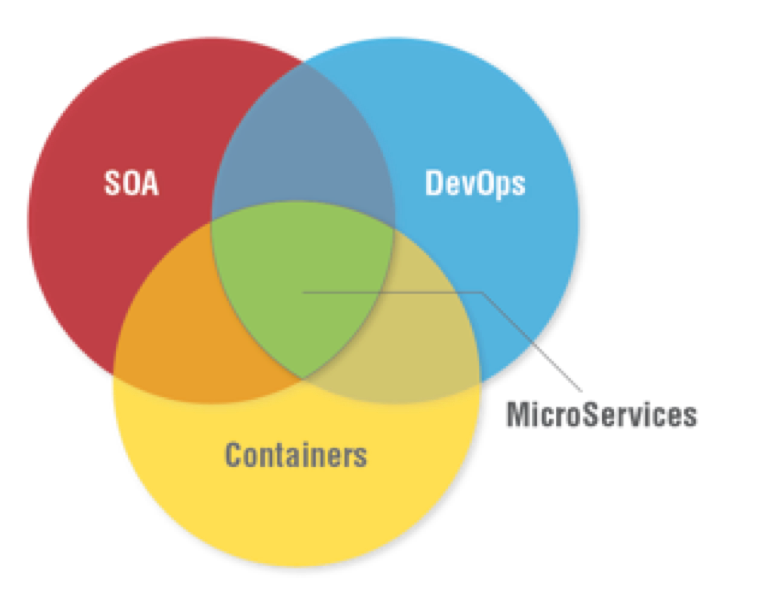 The sources: a brief review

Before we move into a deeper inspection of the sources - are those two common approaches to microservices “wrong?” Or, asked another way - again by a friend of mine while I was droning on about this subject, paraphrased - why am I such a hater?
To be clear, I’m not a microservices hater and I’m not really a hater on anyone who approaches microservices those ways, it’s just that they’re incomplete. Glomming on blindly to the latest fad in software development is not a great thing - eventually, the way software moves, something at the edges will become more mainstream and better understood. In the case of the intrepid CQRS adopters, they’ll eventually figure out that cherry picking a specific feature of microservices won’t yeild the magical results they might be expecting.
A historical SOA approach is reasonable, too, but software people by-and-large are pragmatic people and a “history of software” lesson tends to be less instructive than just getting in and doing it.
The insight I got from reading about and deploying microservices is as follows: Implementing microservices - whether with an existing application or green field - requires some prerequisites, without which, the objective of scale isn’t being achieved. Some of these prerequisites are much easier to understand than others, primarily due to our human nature of trying to analogize with past concepts.
Devops is a clear one - being able to have an agile, cross-talent team deploy what they build - but it’s not enough. Having an organization on the way to or at achieving continuous delivery is a prerequsite. Being able to deploy in a discrete manner that automates testing and load along the way is an advanced organizational behavior. Not everyone’s there yet, not everyone’s at devops, and not everyone needs that level of intricacy to behave this way to deploy software.
Decentralized everything is another. While that sounds vague, because it is, it implies no “layered” architecture. No abstracting security to a security infrastructure, no abstracting orchestration to some orchestration gateway, no abstracting of governance to a governing body. This one’s also difficult to achieve for existing organizations that built around these processes of separated architectural and organizational layers. Why’s this important, though? Well, to move at scale, microservices dictates that the unit of a service be fully secured, governed, and managed by the “two-pizza” team. For green field microservices project, this isn’t too hard a concept. Refactoring an existing organization can be.
A corallary to the above is domain-driven design for data - decentralizing the data, creating bounded contexts, and therefore relying on some level of eventual consistency in the data which services access. Additionally, dealing with failure - whether network, self, or data (inconsistencies) is another overlooked aspect. This is where one of the parents of microservices - distributed computing - rears it’s head. Microservices puts a burden on the service design team to deal with the data for the service and the service alone as well as fault tolerance behaviors. No calling out to anything else to get this done, resulting in additional code. Shared libraries can help here, but the onus is on the service developers. In larger organizations, “boilerplate” gets abstracted (for example, in the case of security) to another “layer” or even another group.
Scale occurs at every level - Organization, systems, devices, development, testing. And not everyone needs to scale this way.
Microservices is SOA at scale.

Mentioned above, the disillusion of SOA when used with “vendor-driven SOA” products provided a great impetus for practitioners to go back to SOA’s first principles and remix them with best practices of modern software development. SOA, at its roots, is not about implementation but of organization, of the architecture of a system. Scaling a system has been the greatest priority of the “internet 2.0” or “web scale” era - taking the “move fast and break things” mantra of Facebook to heart and making it stable.
To be very clear here, scale is one of the prime drivers. The goal isn’t speed of invocation, it’s throughput - how many requests can be handled, elastically, rather than a finite amount quickly.
Also frequently cited - so much so, that the in-joke is that you can’t have a microservices article without mentioning it - is Conway’s Law, from Melvin Conway (inventor of the Game of Life), from 1968:

This implies that the methods of communications between groups - say your project management, dev, qa, and ops groups - defines the process by which your system will be built. There’s your nice, flawed waterfall model of system design and development.
Recasting SOA in a modern light has meant that practitioners have had to discover the gaps in SOA and accommodate for them. This has led to the principles in Fowler and Lewis’s article, mentioned above:

As with any architecture choice, there are tradeoffs. For microservices, I’ve compiled a few, here:

Email ThisBlogThis!Share to TwitterShare to FacebookShare to Pinterest
Labels: microservices